There’s a recent survey by IDC in which the vast majority of enterprise respondents name IBM as the vendor able to most effectively provide Infrastructure as a Service (IaaS). Surprisingly (sort of), the megascale public cloud providers, Google, Microsoft and Amazon Web Services come in 5th, 6th and 7th respectively. As a former AWS employee and cloud analyst who firmly believes that a public cloud with essentially unlimited scale, relentless consistency and automated metered service is the “real” cloud, I generally agree with the sentiment that the old line IT companies like IBM and HP have fallen way behind. But from a business strategy and perception viewpoint, it might be a different story. 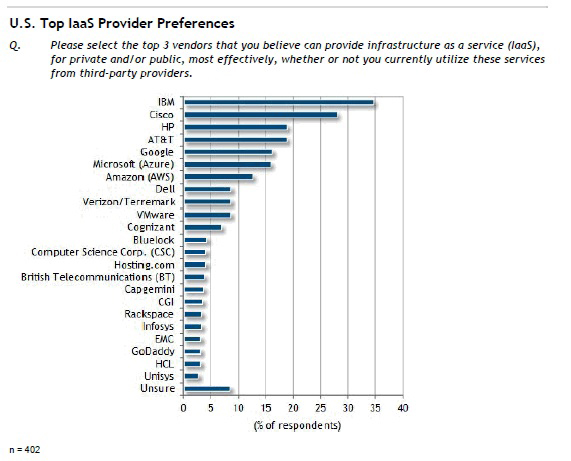 IBM and AWS come at cloud from opposite ends of the spectrum, with recent sentiment casting AWS as the innovator and IBM the stodgy laggard. AWS has quietly built a dizzying array of cloud services that are truly innovative. Unconstrained by legacy technologies or an aging install base, AWS delivers the technologists’ dream of the cloud. A built from scratch platform that offers simple and elegant tools to dynamically scale to meet demand and to build next gen applications that leapfrog the limitations inherent in traditional IT: scale-up, on-premises hardware deployments that take years to design and deploy, millions of dollars to build and operate, and lock customers in to contracts, architectures and old ways of thinking. AWS has added a tremendous number of users, new services and improvements in an insanely short amount of time, disrupting the IT industry as a true outsider. But what AWS lacks is relationships with enterprise buyers, credibility with enterprise workloads and compatibility with what enterprises run today. If you want to use AWS for enterprise IT, you have to be willing to walk away from your investments in equipment, software and knowledge that you’ve accumulated over years of acquisition, operation and experience.

IBM on the other hand is the ultimate insider. They are the Kleenex of IT, with deep, decades long relationships with most every member of the Fortune 500, a comprehensive technology portfolio as well as a dominant services organization that is trusted to outsource whole IT organizations and solve complex business problems generally and for specific vertical challenges.

In spite of these advantages, IBM has watched the pack of upstarts﹣AWS, Google and Microsoft﹣create the cloud, while they peddle aging offerings with some new cloud badges glued on. Yes, they have acquired SoftLayer and gotten involved with OpenStack, but this has led them to a patchwork offering of native, bought and open-source offerings, many of which are dubious in credibility as “real cloud,” mostly being consumed as some sort of hosting arrangement, or on-premises semi-automed, private cloud that looks a lot like simple virtualization; all marginal improvements over traditional IT rather than transformational cloud innovation.

But as the IDC survey shows, IBM has the perception among enterprise buyers as THE leader in cloud. What the pure technologists at AWS and elsewhere might not realize is that Enterprise IT for the most part isn’t driven by innovation, or even cost savings, but by managing risk. As an analyst at Forrester, I heard over and over from enterprise IT leaders that they wouldn’t lose their jobs if they spent too much, or if things moved slowly, but that they would get fired if there was downtime, data loss or any other notable embarrassment. And people are scared of getting fired, as they are scared of choosing to adopt new technologies that render their hard earned skill sets irrelevant.

There’s no doubt that AWS, Microsoft, and Google have made big strides in creating the “real cloud,” innovation that will change our world forever. But the main consumers of this innovation today are startups with no legacy architectures to integrate with and little to lose, as well as innovators within enterprises that have used their credit cards to solve problems quickly and effectively. When it comes to mission critical deals purchased by central IT at Fortune 500 companies, there’s little the cloud innovators can point to. Which doesn’t mean that IBM has won, but it does mean that the winner in enterprise cloud has yet to be determined.

While IBM may seem to be slow playing the innovation of the cloud with a focus on private and hybrid architectures, and a willingness to choose custom architectures as opposed to true industrialization of IT, this is where the majority of enterprises are today. While IBM might not be first in cloud innovation, they are having a conversation with the largest number of enterprises about how to solve huge business problems with cloud technology, which AWS is struggling to do. IBM typically has 20 or more representatives with badged access to the offices of much of the Fortune 500, and has many more in the case of services deals. Each AWS rep typically carries 20 or more enterprise accounts and struggles to find phone numbers for IT leaders, much less the ability to convince them that AWS can solve their most challenging problems. IBM has thousands of seasoned professional services staffers around the globe actively tackling the world’s toughest business problems, along with partnerships with every software, hardware and systems integrator option out there. AWS has a professional services team that could probably fit in a single school bus, and is struggling to build productive relationships with the big SI firms and the vendors that power the enterprise.

It’s easy to ding IBM on not innovating enough or transforming enterprise IT quickly enough. But it would be foolish to think that they won’t be able to shape the future of enterprise cloud adoption and the face of enterprise computing over the next decade given the trust, credibility, and deep relationships they bring to the table, as well as the huge investments they have made and planned in their effort to win in cloud.

3 thoughts on “IBM has the access to beat AWS, Google, and others at Enterprise Cloud”

Azure, .NET, Node.js and anything else

A deeper look at disruptive business and personal technology

The Line -- by Ron Riffe

Conversation on the world of IT and all things storage